The Tory spending cuts are based on ideology, not sound economics. This is becoming more and more clear as the scope of the cuts are revealed. Recent revelations in the Tories’ plans to increase the tuition fee cap to £9000 per year will block hundreds of thousands of potential students from attending university, particularly the elite universities which already have a disproportionate number of students from private and public schools.

There hasn’t been an increase in spending on legal aid in more than 10 years, whilst costs including inflation have soared. This amounts to a real-term 25% cut in spending over the last 10 years. Further cuts won’t just restrict access to legal representation, they risk the collapse of the entire system.

Due to the lack of funding over the last decade, the Legal Services Commission, the body that controls legal aid in England and Wales, is so underfunded that it cannot afford to hire enough staff to process legal aid bills from solicitor firms. This has the knock-on effect that these firms cannot pay their overheads. Many are on the verge of bankruptcy, others have stopped offering a legal aid service.

The cuts to the legal aid will impact on almost every area: clinical negligence, education, employment, immigration, benefits, debt, housing and certain family law cases. These are all areas that significantly affect many people on low-incomes on a daily basis, many of them needing this support to keep their homes, jobs and families. The repercussions of these cuts will have far-reaching consequences for the rest of society also.

If legal aid is taken away from employment cases, this will allow employers to exploit their low-paid workforces with impunity, safe in the knowledge that they don’t pay their staff enough for them to be able to afford legal representation. Included under employment law is sexual harassment in the workplace. If women, already disproportionately affected by the cuts as well as workplace harassment and exploitation, cannot get legal representation the pay-gap will increase and women will suffer further exploitation and oppression in the workplace.

There are exceptions for domestic violence cases written into the changes, but this won’t be sufficient to protect people, particularly women and children. It is estimated that only 2.5%-15% of domestic abuse cases are reported. If victims fear they could be left in crippling poverty due to legal fees fewer cases will be reported and more people will live their lives in fear and oppression.

Reform is desperately needed in the legal aid system but not because we need to make cuts and not by cutting peoples’ access to services. Whilst the vast majority of solicitors earn very modest sums from legal aid, particularly considering the amount of work they do, there are a handful of barristers who earn disproportionately more. Many of the top Queens’ Counsels can bill the legal aid system for up to £500,000 per year, on top of their salaries for private cases. I would suggest this is where the savings can be made, not by taking the services away from the people who need them and the overworked and underpaid solicitors.

Free access to legal representation for those who need it is a cornerstone of a fair and equal society. The cuts to the legal aid system will lead to increases in exploitation, sexual harassment, discrimination, segregation, poverty, debt, homelessness, domestic violence, abuse….

Doesn’t sound much like a fair society to me.

When the Tories make a fraudulent claim, they really make a fraudulent claim. Labour may have more MPs being charged but their crimes pale in insignificance compared to their Tory peer comrade. The Times reported this morning that Labour 3 MPs and one Tory Lord have been charged over the MP’s expenses scandal. The MPs are Elliott Morley, David Chaytor and Jim Devine – no doubt soon to be lifted from the depths of back-bench obscurity to become household names – and the peer is Lord Hanningfield.

Each of the three Labour MPs has committed serious fraud; David Chaytor having “flipped” his second home several times and claimed around £13000, Elliott Morley claimed around £16000 on a so-called “phantom” mortgage and Jim Devine claiming around £2157 and £2326 respectively for electrical and carpentry work that allegedly never happened. Now these are serious cases and should be delt as such but they are nothing when compared to the details of Lord Hanningfield’s claim.

Conservative peer Lord Hanningfield is being charged over claiming £100,000 for staying overnight in Lonodn despite living only 46 miles away. This seems to be a significantly more serious offense than those three Labour MPs are accused of.

This is just another reason that a conservative government is a bad idea. Look at the scale of the mistakes. Labour brought us two wars, both causing monumental loss of life and massive destabilisation in the middle-east. The last Conservative government gave us numerous wars, armed Saddam & the Mujahideen, destroyed British industry and created the laissez-faire economic system that brought us the recession. 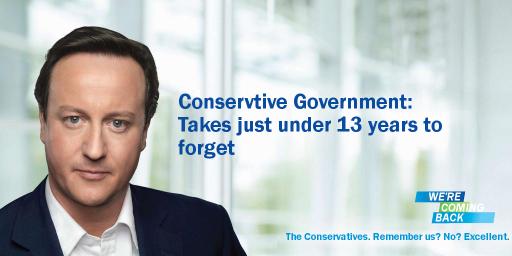 Ok so there probably isn’t an upside to collective amnesia, but still are we really so goldfish-brained that we, as a nation, have forgotten what happened the last time we let the Eton-elite get behind the wheel? They’re the ones that presided over, some might say created, the laissez-faire economic system that created the recession. A perfectly planned time-bomb that will allow David Cameron to sweep into power with a landslide and set us up for the next round. I may have been young when John Major lost out to Tony “the Butcher” Blair, but I have not forgotten who the Conservatives are and what they stand for. I was recently speaking to a young Conservative who told me that “In order for a country to operate as a competitive entity there must be an elite, educate class and the state system simply cannot provide an education system capable of teaching these people”. David may have the air-brushed clean features of a Vogue model but the the heart of the conservatives is in the back benches – a seething mass of elitism, racism, homophobia and exploitation for profit.